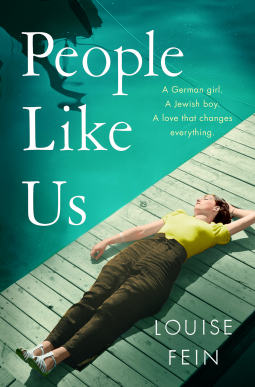 People Like Us by Louise Fein
Publisher: Head of Zeus
Release date: 7 May 2020
Back cover blurb: 'I nearly drowned and Walter rescued me. That changes everything.' Leipzig, 1930's Germany. Hetty Heinrich is a perfect German child. Her father is an SS officer, her brother in the Luftwaffe, herself a member of the BDM. She believes resolutely in her country, and the man who runs it. Until Walter changes everything. Blond-haired, blue-eyed, perfect in every way Walter. The boy who saved her life. A Jew. Anti-semitism is growing by the day, and neighbours, friends and family members are turning on one another. As Hetty falls deeper in love with a man who is against all she has been taught, she begins to fight against her country, her family and herself. Hetty will risk have to risk everything to save Walter, even if it means sacrificing herself...

Hetty Heinrich, daughter of a high ranking SS Officer and member of the Bund Deutscher Madel ((BDM) the League of German Girls) the female branch of Hitler Youth, truly believes in the Fuhrer and his ability to make Germany a better country after WW1.

Walter is the crush that a 7 year old Hetty never grows out of. After he saves her life when she nearly drowns she is captivated by him. But he is her Brother's friend, older than her, and therefore out of the question.

This is even more apparent when she learns something about him that changes everything.

Walter is a Jew, and therefore now forbidden entirely from their school, and their house. Her Brother abandoning his friendship with Walter out of loyalty to both his Father, and Nazi ideology. Hetty cannot believe that Walter is a Jew, he is the perfect Aryan poster boy.

She doesn't really think any more of Walter, until she meets him years later by chance as a teenager and realises what a remarkable young man he is. At first, she is confused by his beliefs, and they argue frequently about what is right for their country.

As time goes on and Hetty realises that she is falling in love with Walter, she also begins to realise that everything about her country and the way that they are treating people is wrong. She feels ashamed, and vows to help Walter in any way that she can.

This of course is without her family's knowledge, as her Father is a high ranking SS officer who believes in everything the Furher and the Nazi party stand for. But Hetty knows that she no longer does and is determined to do all that she can, to help Walter and make educate people to her country's leaders and their terrible crimes.

People Like Us is a beautifully written, important novel about the sacrifices that we must make for those that we love.


People Like Us is available from Amazon online and all good book shops.