Review - Dead to Her by Sarah Pinborough 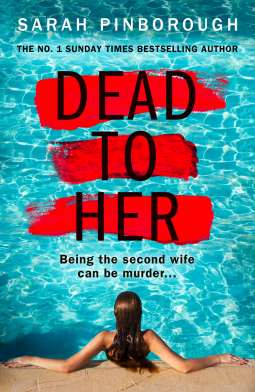 Dead To Her by Sarah Pinborough
Publisher: HarperFiction
Release date: 4 June 2020
Back cover blurb: When Marcie met Jason Maddox, she couldn’t believe her luck. Becoming Jason’s second wife catapulted her into the elite world of high society. But underneath the polite, old money manners, she knows she’ll always be an outsider, and her hard-won life hangs by a thread. Something new… When Jason’s widowed boss brings back a new wife from his trip to London. Young, beautiful, reckless – nobody can take their eyes off Keisha. Including Jason. Something you can never, ever undo… Marcie refuses to be replaced so easily. People would kill for her life of luxury. What will Marcie do to keep it?

When Jason Maddox's recently widowed boss returns from a trip abroad with a (significantly younger) new wife, no one can take their eyes off her. Keisha is beautiful and Marcie feels threatened by her presence.

The start of Marcie and Jason's relationship wasn't exactly a conventional one. He divorced his first wife to be with her after a whirlwind affair. And now Marcie thinks he's got his eyes on Keisha...

But Marcie doesn't understand that Keisha is not the least bit interested in Jason, and although it's fair to say that Jason is distracted, it isn't necessarily all about Keisha. He has a lot of his plate with the business, and has aspirations of buying his boss out.

Marcie and Keisha have more in common than they think. They are both much younger than the society wives that are part of their social circle, and they both had poor and difficult upbringings.

One unlikely drunken afternoon brings them closer together and changes everything between them forever. But is everything as it seems, and will they be able to trust each other when the time comes for true friends to stick together?


Dead To Her is available now via Amazon online and all good book shops.