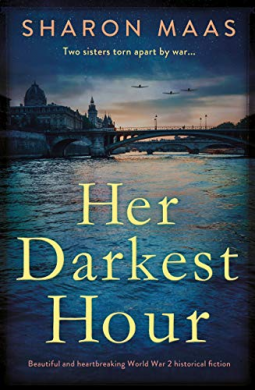 Her Darkest Hour by Sharon Maas

Publisher: Bookouture
Release date: 22 May 2020
Back cover blurb: ‘You and me – we’re sisters, not enemies. We’ve got a real enemy at our door and we need to focus on that – together, united. I don’t want to be fighting you as well.’ In the small French town of Colmar, swastikas hang from lampposts, tanks are lined up outside the town hall, and twenty-one-year-old Marie-Claire is in love. She will do anything for her childhood friend Jacques, including spying on her German boss, Dietrich Kurtz. Anything to make Jacques see her in a new light, as something more than just a silly little girl. But when Jacques rejects her, everything changes. Mortified and stung, Marie-Claire feels the need for revenge. She turns her back on those she loves and is catapulted into a new life. Her little sister Victoire is aghast at her sister’s traitorous behaviour, not least because Marie-Claire is endangering Victoire’s own life-threatening mission, hiding Jewish refugees in their mother’s wine cellar. And when Marie-Claire marries Kurtz, Victoire knows her relationship with her sister has been poisoned for ever. But when Victoire learns someone she loves is in terrible danger, her only choice is to trust the sister who betrayed her. Kurtz, Marie-Claire’s cruel and heartless husband, has key information and Victoire must persuade Marie-Claire to obtain it, even if it means risking Marie-Claire’s life. As secrets come to light and close bonds are broken, will the sisters be able to heal old wounds? An unforgettable and unputdownable story of two sisters ripped apart by World War 2. Fans of The Nightingale and The Ragged Edge of Night will fall in love with Her Darkest Hour.

Marie-Claire is in love with Jacques, but he sees her as nothing but a friend as they have grown up together and are more like Brother and Sister. Jacques is a member of the French resistance, and as the Nazi's roll into the small town of Colmar, he is ready to fight.

Marie-Claire's younger Sister Victoire is determined to help those in the resistance and fight against the German occupation. When Marie-Claire goes back to work in her now occupied building under the command of Dietrich Kurtz, Victoire cannot pretend to be happy about it. But her sister speaks multiple languages and could be useful to the movement.

At first Marie-Claire is keen to help, believing that it will impress Jacques, but she soon understands that nothing she does will make any difference, so she decides to make the best of a bad situation and befriend some of the others girls in the office.

In doing so, she changes the course of her life forever. An unprecedented chain of events lead to her marrying her high ranking Nazi officer boss and moving away from her family and betraying her family, with her union to the enemy.

Marie-Claire's choice unfortunately wasn't so much of a choice, as she would lead her family to believe and she regrets her marriage before it even happens, but she is trapped, and can do nothing to escape without her family's help.

The question is, will they be able to come to her assistance when she needs them most?


Her Darkest Hour is available now via Amazon online and all good book shops.