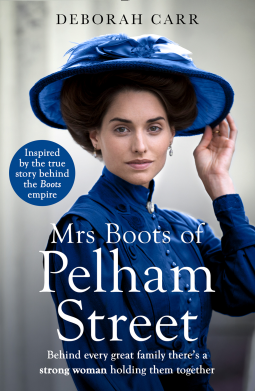 Release date: 15 May 2020
Back cover blurb: Behind every family there's a strong woman holding them together. As the wife of esteemed businessman, Jesse Boot, Florence's position in society is much changed from her quiet life as a shopkeeper's assistant. Now a lady of means, Florence is expected to act in a way society demands. And whilst Florence is more than happy to be a dutiful wife and a doting mother, as the Boots empire continues to grow, there is so much more to her than simply being Mama or dearest. Helping the staff and customers who rely on her and the business gives Florence an added purpose. Can she show society that a woman can have it all...?

Mrs Boots of Pelham Street is the second book in Deborah Carr's series, and it's another delight of a novel. The series is inspired by the life of Florence Boot, the woman behind the Boot's empire.

From meeting Jesse Boot as a single woman at home in quiet Jersey, to married life in bustling Nottingham, Florence Boot has had quite a busy few years. As the wife of esteemed businessman Jesse Boot, Florence's position in society has changed.

From shopkeeper's daughter and assistant, to a lady of society and business, and a Mother. Florence Boot is a busy woman, but she wouldn't have it any other way.

In an era where a woman certainly wasn't expected to go out to work if she was married, especially if she were married with Children, Florence has a lot to prove to society in order to demonstrate that yes, Women can have it all.

Florence is an asset to her husband's business, and in this installment we really see her begin to make her mark on the Boot's empire.

Once again, I can't wait to read the next installment in the series, and look forward to seeing what Florence gets up to next.

Mrs Boots of Pelham Street is available via Amazon online and all good book shops.

Thank You to the publishers who approved my request in advance for an honest review.