Review - What Only We Know by Catherine Hokin 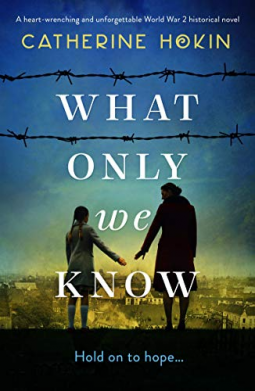 What Only We Know by Catherine Hokin
Publisher: Bookouture
Release date: 27 May 2020
Back cover blurb: When Karen Cartwright is unexpectedly called home to nurse her ailing father, she goes with a heavy heart. The house she grew up in feels haunted by the memory of her father’s closely guarded secrets about her beautiful dressmaker mother Elizabeth’s tragic suicide years before. As she packs up the house, Karen discovers an old photograph and a stranger’s tattered love letter to her mother postmarked from Germany after the war. During her life, Karen struggled to understand her shy, fearful mother, but now she is realising there was so much more to Elizabeth than she knew. For one thing, her name wasn’t even Elizabeth, and her harrowing story begins long before Karen was born. It’s 1941 in Berlin, and a young woman called Liese is being forced to wear a yellow star…A beautiful and gripping wartime story about family secrets and impossible choices in the face of terrible hardship. Perfect for fans of The Tattooist of Auschwitz, We Were the Lucky Ones and The Alice Network.

Karen Cartwright is still grieving the loss of her Mother more than a decade on when she is called home to nurse her ailing Father. Since her Mother's death, their relationship has always been strained, he never speaks about her suicide, and Karen often wonders if it was her fault that she died.

Berlin 1941; Liese Elfmann, in a world of privilege and fashion, is forced from her family home into the ghetto, and made to wear a yellow star. Unfortunately it seems that even the wealthiest and most influential of Jews are subject to the Nazi regime.

1970's England; Elizabeth Cartwright is struggling to cope with her young daughter and English husband. She cannot forget her home country and the horrors that she left behind. Will she ever know if she did the right thing in leaving it all behind? Or should she have stayed behind and tried to make a new life in a country so changed by War.

When Karen finds a photograph of her Mother and Father on their wedding day, she notices a stranger in the background, and upon further investigation finds a love letter from a stranger to her Mother. Is it the man in the photograph? Could this be the real reason for her Mother's actions?

Karen isn't all that sure that she should go digging around in the past, particularly as her Father has been so reluctant to talk about it. But could she finally find the answers that she is looking for? Only time will tell.

What Only We Know is a beautifully written novel about making impossible choices in the worst of times, and how those choices continue to shape our future lives.


What only We Know is available now via Amazon online and all good book shops.