Review - When We Fall by Carolyn Kirby 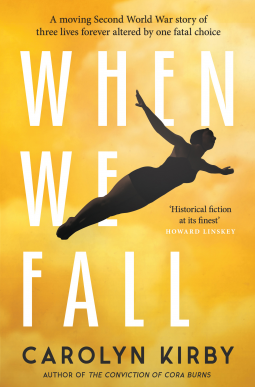 When We Fall by Carolyn Kirby
Publisher: No Exit Press
Release date: 7 May 2020
Back cover blurb: England, 1943 Lost in fog, pilot Vee Katchatourian is forced to make an emergency landing where she meets enigmatic RAF airman Stefan Bergel, and then can’t get him out of her mind. In occupied Poland, Ewa Hartman hosts German officers in her father’s guest house, while secretly gathering intelligence for the Polish resistance. Mourning her lover, Stefan, who was captured by the Soviets at the start of the war, Ewa is shocked to see him on the street one day. Haunted by a terrible choice he made in captivity, Stefan asks Vee and Ewa to help him expose one of the darkest secrets of the war. But it is not clear where everyone’s loyalties lie until they are tested. Published to coincide with the 75th anniversary of VE Day and based on WWII atrocity the Katyn Massacre, When We Fall is a moving story of three lives forever altered by one fatal choice.


When We Fall is a unique WWII novel, based in part on the lesser known Katyn Massacre.

British Air Transport Auxiliary pilot Vee Katchatourian is lost in fog and forced to make an emergency landing at a RAF base, where she meets fellow pilot Stefan Bergel. Once departed and on her way back to her own base, she cannot forget the handsome, enigmatic airman.

In occupied Poland, Ewa Hartman runs her Father's guesthouse believing that her fiance Stefan is dead, captured by the Soviets at the beginning of the war. When a high ranking Nazi officer begins to take an interest in her, Ewa questions her own loyalties both to Stefan and her own country.

The man who captures both Vee and Ewa's hearts is Stefan Bergen, escaped POW, RAF pilot and member of the Polish resistance, or is he? His loyalties to the women in his life, as well as the side he is fighting for, are at times unclear.

Stefan is a complex character, unlikable at times, and vulnerable and lovable at others. It is easy to see why he has at least two women falling at his feet.

Who knows how many others there could be, and will his love of a beautiful woman ultimately be his downfall?


When We Fall is available now via Amazon online and all good book shops.