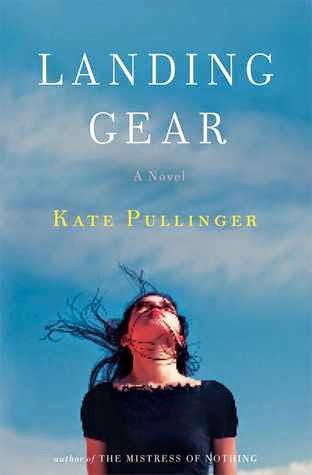 Back cover blurb: Suburban housewife Harriet spends her days doing what she’s worst at. Formerly a local radio host, now she grocery shops for her family who has too much to eat, parents a son who refuses to communicate with her, and tries to be a wife to a man who hasn’t embraced her in years. But what starts out as a mundane trip to the supermarket turns her world upside down when a mysterious man falls out of the sky from the landing gear of an airplane onto her car, and survives. He’s starving and he’s freezing cold. What can she do but bring him home to her family?


Landing Gear was inspired by real-life accounts of airplane stowaways. It is very different from anything I've read recently. Highly original in her writing, Kate Pullinger has the ability to switch between characters in the novels initially very short chapters without confusing the reader.

Landing Gear opens with Harriet, one of our main protagonists at the Supermarket, minding her own business loading her shopping into her car when suddenly a man is falling from the sky, right on to her car. Is this possible? Is he dead? Is Harriet dead?

Landing Gear then switches back a few years to the shut-down of all European air space following the eruption of Mt. Eyjafjallajokull and its all consuming ash cloud. At this time Harriet is working at a local radio station desperately trying to make it in to television. She seizes her chance to capture the 'quietness' of London in the absence of air traffic as her big break.

Here we also meet the other characters; Harriet's husband Michael is stuck in the US on business, her son Jack hanging out with his mates in places that he shouldn't be, and Emily, not part of the family, but somehow you feel she should be. And then there is Yacub, working in Dubai, desperately trying to make some money to send back to his family in Pakistan.

These characters are not only separated by the ash-cloud, but something deeper. It is the arrival of Yacub some years later straight on to Harriet's car that somehow brings them all together and teaches them all something about themselves.

Landing Gear is a unique read, one that I would highly recommened to anyone looking for something a little different.

You won't be disappointed.