Review: the End of Law by Therese Down 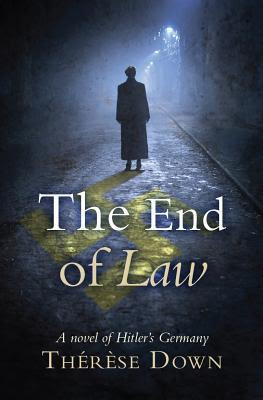 Back cover blurb: Berlin, 1933: as Hitler rises to power; the law--designed to protect and serve--becomes twisted to the will of those who dream of a pure Aryan race. SS Officer Walter Gunther is intensely loyal to the Third Reich. His readiness to kill without question or remorse would seem to make him the ideal candidate to lead the T4 euthanasia programme. SS officer Karl Muller, a trainee doctor and engineer, is also brought into the programme, and assured that his work is consistent with the Hippocratic oath he's due to take. Their mandate: to kill the "unworthies"--not just the Jews, but crippled children, the mentally ill, homosexuals. Hedda, Walter's wife and old acquaintance of Karl, has no idea of what their work entails. Until, that is, the fate of their families is at stake, and each must confront afresh the choices they have made. This dark, tense novel is a compelling story of human tragedy, and man's potential to revel in, or fight against, the evil actions of a corrupted nation.


For me, there are lots of important books about Nazi Germany that deal with the holocaust and are usually from the victims perspective. But I have never read a novel quite like the End of Law, and it is brilliant (and not only for its alternative viewpoint/subject matter)!

Hedda is a sensible girl from a good family who is expected to marry well, and she does, capturing the heart the eligible and handsome SS Officer, Walter Gunter. Unfortunately Hedda has yet to realise that Gunter’s loyalty to his political party far outweighs any loyalty he may have for his family.

Walter is already a highly regarded officer in the Nazi party when he is asked to become involved with T4 – an SS managed euthanasia ‘program’ designed to expel Germany of the mentally ill and disabled. As he becomes more involved with his work, he withdraws from his family.

His parents visit he and his wife unannounced as Walter's father is concerned about his work with the Nazi party, the direction that the party are taking, and his sons beliefs.What follows is the first real indication of just how deeply entrenched the parties beliefs have become instilled in Walter, and this sets the scene for the rest of the novel.

Hedda is unaware of the work that her husband is doing, she is only aware of a change in him, and he is no longer the man she married.

As the war in Europe rages on, tensions between husband and wife escalate, their family further torn apart by a bomb ruining their family home and threatening their daughters life. Could this bring them closer together, or will it drive a terrible wedge through an already strained marriage?

What follows cannot be predicted. It is a true exploration of how even those around us that we love, can at times be completely different human beings to the ones that we thought they were.

It is a novel that reminds us that although all of the war crimes that were committed were horrific, at the end of the day they were committed by real people, with real families and loved ones of their own.
And that only makes it even more chilling.
The End of Law is available from 27 March 2016.
You can pre-order it now via Lion Hudson and Amazon online.

Many thanks to Rhoda at Lion Hudson for sending me an advance copy of this novel in exchange for an honest review.