Review - The Daughters of Ironbridge by Mollie Walton 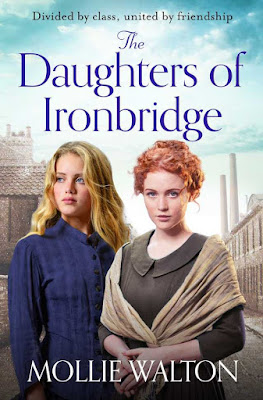 Back cover blurb: Together can they overcome hardship, poverty and disaster? 1830s Shropshire. Anny Woodvine’s family has worked at the ironworks for as long as she can remember. The brightest child in her road and the first in her family to learn to read, Anny has big dreams. The moment she is asked to run messages to the big house, she’s ready to grab the opportunity with both hands. Margaret King, only daughter of the King family, is surrounded by privilege and wealth. But behind closed doors all is not what it seems. When Anny arrives, Margaret finds her first ally and friend. Together they plan to change their lives. But as disaster looms over the ironworks and the King House, Margaret and Anny find themselves surrounded by secrets and betrayal. Can they hold true to each other and find a way to overcome their fate? Or are they destined to repeat the mistakes of the past?

Oh, what a beautifully written novel this is. Set in 1830’s Shropshire, The Daughters of Ironbridge tells the story of an unlikely and largely forbidden friendship of differing classes.

Anny Woodvine, although from a poor family, is well educated for both the time and her class. She is able to both read and write and upon delivering a message to the ‘Big House’ after a chance visit to her Father at the iron works is asked to be their messenger.

It is whilst running what at first are nothing more than small errands that Anny meets Margaret, the King family daughter. Margaret is desperately lonely, despite her obvious wealth, she doesn’t have a good relationship with either her Father or Brother and a chance encounter between the girls leads to a tentative friendship.

The girls both know that their friendship would be frowned upon by both their own families and society, so they begin meeting in secret and writing to each other when they are unable to meet, leaving their letters in an agreed hiding place.

Both girls believe that nothing can break their friendship, and that together they can eventually change societies ideas about their individual classes. Until disaster strikes at the iron works, their ambitions are almost believable (particularly as a modern day reader). Is their friendship about to be tested to its limits?

The Daughters of Ironbridge is the first in Mollie Walton’s Ironbridge Saga series and I cannot wait to read the next!


The Daughters of Ironbridge is available from 18 April 2019.
You can pre-order it now via Amazon online and all good book shops.