Review - After The End by Clare Mackintosh 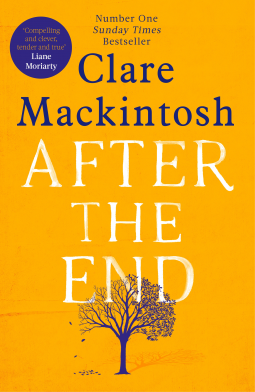 Back cover blurb: Max and Pip are the strongest couple you know. Only now they're facing the most important decision of their lives - and they don't agree. As the consequences of an impossible choice threaten to devastate them both, nothing will ever be the same again.
But anything can happen after the end . . . .

I'm not sure where to start with this beautiful novel, but I do know that I haven't been able to read for a few days after finishing it, because it has left such an impact.

From her very first novel, I Let You Go, I have been a Clare Mackintosh fan, and I have to admit, I was slightly worried that I wouldn't enjoy this departure from the usual psychological thriller genre. I couldn't have been more wrong.

Meet Max and Pip, they are the strongest couple, facing the most difficult and important decision of their lives. Their three year old son Dylan is battling a brain tumour, but requires further treatment in order to survive.

The prognosis is bad enough, but then they are hit with another blow. The treatment Dylan requires to stand a chance of survival is not available on the NHS.

Max and Pip must decide whether to let their son go and release him from further pain, or to battle for treatment in the USA. After a period of time, it becomes clear, that they must battle - against each other.

Max and Pip's perfect relationship is suddenly, brutally torn apart by each parent believing they know what's best for their son and his future. They must go to court to decide, with their doctor and the hospital trust on one side, and one parent alone on the other.

So, what happens 'After the End'?

As the book's tagline suggests, anything can happen after the end. We are treated to two alternate versions of the future after the court hearing, mostly from the perspective of Max and Pip, but with an occasional chapter from Dylan's doctor.

I really can't say any more without giving anything away, but I urge you to read this novel - including the author's notes. It is heartbreaking, yet beautiful and one of my reading highlights of this year so far.

After the end is available now via Amazon online and all good book shops.
Thank You to the publishers who approved my request via netgalley in exchange for an honest review.
Newer Post Older Post Home