Review - The Warehouse by Rob Hart 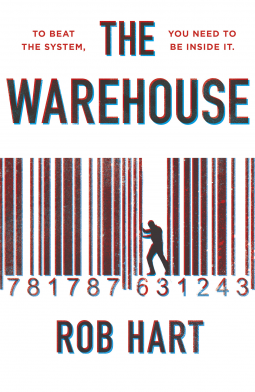 The Warehouse by Rob Hart
Publisher: Random House UK
Release date: 13 August 2019
Back cover blurb: In a world ravaged by bankruptcy and unemployment, Cloud is the only company left worth working for. But what will it cost you? Amidst the wreckage of America, Cloud reigns supreme. Cloud brands itself not just as an online storefront, but as a global saviour. Yet, beneath the sunny exterior, lurks something far more sinister. Paxton never thought he’d be working Security for the company that ruined his life, much less that he’d be moving into one of their sprawling live-work facilities. But compared to what’s left outside, perhaps Cloud isn’t so bad. Better still, through his work he meets Zinnia, who fills him with hope for their shared future. Except that Zinnia is not what she seems. And Paxton, with his all-access security credentials, might just be her meal ticket. As Paxton and Zinnia’s agendas place them on a collision course, they’re about to learn just how far the Cloud will go to make the world a better place. To beat the system, you have to be inside it.

Welcome to the Cloud ... employer of choice, or dystopian nightmare? Work of fiction, or a glimpse into the future? The Warehouse makes all of these scenarios plausible. The Cloud is so accurately described that you could believe that it already exists.

The Cloud, is not based on any one current organisation, and instead focuses on a number of ideas, influenced by a number of monumental global organisations. The Cloud can deliver anything, to anyone, at anytime via drone from one of its thousands of Warehouse facilities (or MotherCloud's) in the US.

The Cloud is the United States’ biggest employer, the only organisation left worth working for in a country ravaged with bankruptcy and unemployment. The selection process is brutal, and there are hundreds of hopefuls clamouring each month for the jobs available at their nearest MotherCloud facility. Such a selection process is where we meet our main characters.

One of our main protagonist's Paxton, has an ulterior motive for wanting to work at Cloud; it’s the company that ruined his fledgling business. He is eager to see how the model works from the inside, if the organisation is as brutal as he believes, and if it is what can he do to change that and get revenge, then get out.

In the beginning, he chooses to share this story with Zinnia, who also has an ulterior motive for wanting to work at Cloud, but she’s not sharing hers with anyone. But she is also there to get her head down, do a job, and get out again.

The pairs paths first cross, after meeting at their MotherCloud’s selection process and sitting together on their journey into the unknown. As they continue to get to know each other throughout their induction and inclusion to the Cloud facility, we understand that although appearing to be 'on the same page' they are headed in very different directions...

I don't want to say anymore or I run the risk of giving something away, but I will say this; The Cloud is really enjoyable original novel, and very thought provoking, particularly in this digital age that we all live in, by choice, or otherwise.

The Warehouse is available now via Amazon online and all good book shops.

Thank You to the publishers who sent me a copy of this novel in exchange for an honest review.
Newer Post Older Post Home